Across America by Train - Photography by Matthew Grob

Across America by Train

In the summer of 2016, I was attending a gathering in San Diego and decided to use the opportunity to realize one of my life-long desires – to go cross-country by train. The journey on Amtrak would have taken three days and three trains (New York to Chicago on the Lake Shore Limited, Chicago to Los Angeles on the Southwest Chief, and Los Angeles to San Diego on the Pacific Surfliner).

Sadly, tragedy struck about two thirds of the way in. Just north of Trinidad, CO a minivan with a family of six came through a railroad crossing without looking or stopping. Though no one on the train was injured, there were multiple fatalities in the minivan. We sat there for almost eight hours, with the engine due for a complete inspection once we got to Albuquerque. Based on the arrival estimates into Los Angeles, I would likely not be able to get to San Diego on the third day, so I left the train when we got to Albuquerque around midnight, sat in the airport there until dawn, and caught a flight to San Diego.

The part of the journey that I did complete was enough that I have become enamored of long distance train travel. As many books and movies as I had brought with me, I spent most of the time looking out the window at the wondrous and always varying scenery. It is a part of America that one cannot see from a car on the Interstate. I hope to do it again someday and explore other routes as well. Until then, these photos and their captions constitute a travel essay of sorts.
Read More 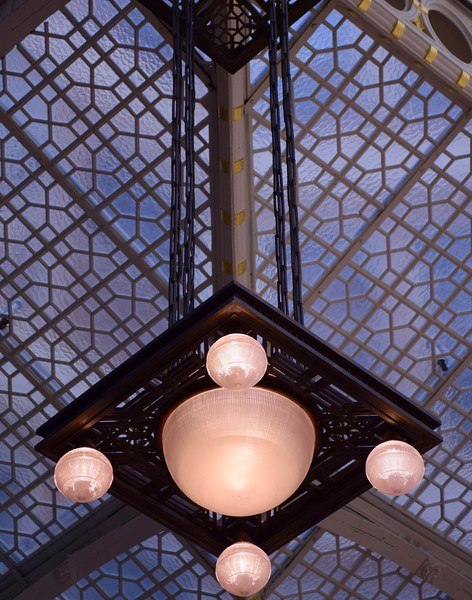 The central court in the previous two photographs is lit by several of these hanging art deco lamps.